Is Garang Kuol The Key? Premier League Target A Source Of Hope For Socceroos Ahead Of The World Cup 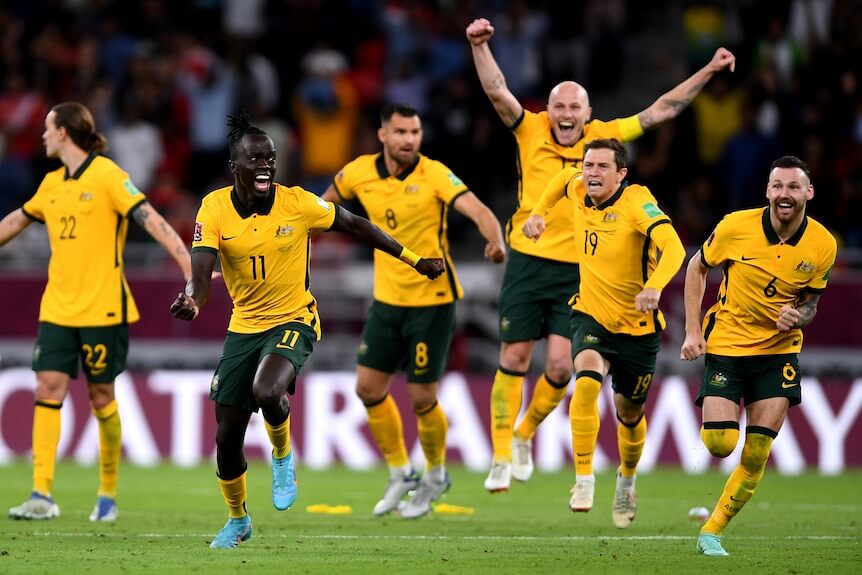 On paper, a four game winning streak before the World Cup sounds like an ideal run of form for a team hoping for a successful campaign, however, the Socceroos’ victories have been slow and unconvincing. Their recent two-game friendly tournament against New Zealand has highlighted the areas where the Socceroos need to improve–and drastically at that.

The first friendly, played on home soil, saw the Socceroos’ strongest XI being outplayed by New Zealand, who dominated possession and registered more shots on goal. Despite a long range strike from Awer Mabil which would later go on to seal the game, the Socceroos had a slow start, which, against stronger rivals, could be catastrophic to their campaign. Holes and errors in Australia’s defence were exposed early in the game, where New Zealand were gifted two chances on goal only 10 minutes after kick-off. Their defence tightened up as the game progressed, and their attacking play became more vigorous, however, Australia were unable to finish any of their chances, often shooting wide or denied by the post.

The second match, played in Auckland, saw a similar slow start for the Socceroos, who played an entirely changed and experimental starting XI. They struggled to find attacking form and control the midfield in the first half, but neither side looked all that threatening going into the break. In the second half, Australia’s attacking play was considerably improved as Metcalfe’s cross was headed into the net by Duke in the 54th minute. Some defensive mistakes allowed New Zealand shots on goal, but the All Whites failed to convert.

In the 73rd minute, Garang Kuol was brought on to make his debut alongside Jason Cummings–and he brought the energy that Australia needed. Out of practically nothing, Kuol initiated an attack that started deep in Australia’s own half, running down the pitch while being chased by defenders. Kuol ended his run by passing to McGree in the box, who saw his shot saved before Jason Cummings’ rebound shot was illegally blocked by a New Zealand handball. The Socceroos were awarded a penalty, which Cummings flawlessly packed into the bottom right corner. Just seven minutes later, Kuol was able to create space in the box for a shot of his own, however, he could not convert from the tight angle.

With only weeks left until kick-off in Qatar, Australia has much to work on if they hope to succeed in their group stage clashes against France, Denmark and Tunisia. Their habit of starting games in the second half is one they must dissipate before the World Cup, else they risk losing games in the first half. Sloppy passes, defensive errors and bad clearances may not have cost much against New Zealand, but when facing off against stand-out players such as France’s Kylian Mbappe or Denmark’s Christian Eriksen, the smallest of errors can lead to a goal. The Socceroos must also be more threatening during set pieces, a goal from a free kick or corner may very well be the game-changer when facing a strong defensive side.

What the Socceroos have lacked in their attacking play is creativity–players who can create chances from nothing and be a nuisance to defenders. Both Garang Kuol and Jason Cummings’ stunning debuts proved to do just that, changing the traction of the game; however, it is unfair to pin Australia’s World Cup fate on two players alone, especially one as young as Kuol. Overall, Australia’s attacking play needs to be more rigorous and creative if they hope to cause problems for their opponent’s backline.

Though Australia’s chances are boosted by France’s recent form–possibly the notorious World Cup winner’s curse in full steam–there is no doubt that they are an unbelievably strong side. With playmaker Christian Eriksen back to full fitness, Denmark are arguably the strongest side in the group, having recently stunned France with a 2-0 win in the UEFA Nations League. Tunisia, meanwhile, are coming to Qatar after a run of inconsistent results, most recently a 5-1 defeat to Brazil in a friendly match. They may prove an easier side for Australia to face, however, the Socceroos must first find consistent form.

Graham Arnold now faces the difficult decision of deciding his final squad for Qatar, and there is no doubt that Australians will want to see Kuol and Cummings named; if not as starters, as super-subs who can come in and change the game. Their presence, especially Kuol’s, has given Australians the hope that their country can be competitive enough to deliver a good World Cup campaign, and it came at a time where it was much needed.

For more, check out Arsenal’s year of progress.