House of the Dragon has quickly become a huge success, allowing people to (finally) get over the ending to its predecessor Game of Thrones. While it is certainly too early to say which characters are fan favourites, it would be no surprise if one of them was the infamous, deadly, and cruel, Daemon Targaryen, depicted by Matt Smith.

Matt Smith discussed his character with Collider and provided some interesting insights to his approach:

Smith continued and agreed that Daemon was like so few characters onscreen and believes that playing him is “both challenging and fun, certainly. You want to do it justice, so I’ve tried to lean into that unpredictability. I hope that comes through.”

Thanks to his approach to the character, Smith was able to give us insights into Daemon’s motivations that might hint at the future for his character:

“I think his motivation is fighting. He loves to fight. He loves to compete. It’s the sport of competition that he enjoys. He’s good at it. And when you’re faced with a very limited possibility in your upbringing, of what the world’s going to offer you, and you have something that you’re good at, you better put your eggs in that basket, and that’s what he does.”

But he isn’t all bad, says Smith, there are people who can trust him: “His dragon can trust him. And his immediate family, Rhaenyra and his brother [Viserys], can trust him. Even though he lets them down, deep down. I think they know he would lie down on the sword for them both. But you never know with Daemon, though. Depending on how he’s feeling.”

Speaking of Rhaenyra, Smith acknowledges that it’s a weird situation: “It’s all connected to his brother, certainly initially. It develops, and I think it’s really beautiful, the way that we’ve got both Milly [Alcock] and Emma [D’Arcy] playing that part. It changes Daemon’s attitude, or changes my attitude as an actor, on a really primitive level. Something shifts and changes. Ultimately, it all leads back to his brother. It’s a very complicated situation.”

Just two episodes of House of the Dragon have been released so far and are currently available on Binge or Foxtel (HBO Max in the U.S.).

For more, Jon Wick’s director wants to make his Ghost of Tsushima film completely in Japanese. 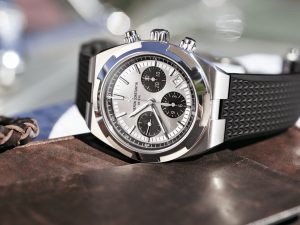 Vacheron Constantin might give Rolex a run for their money with their addition of a Panda model in the Overseas line.