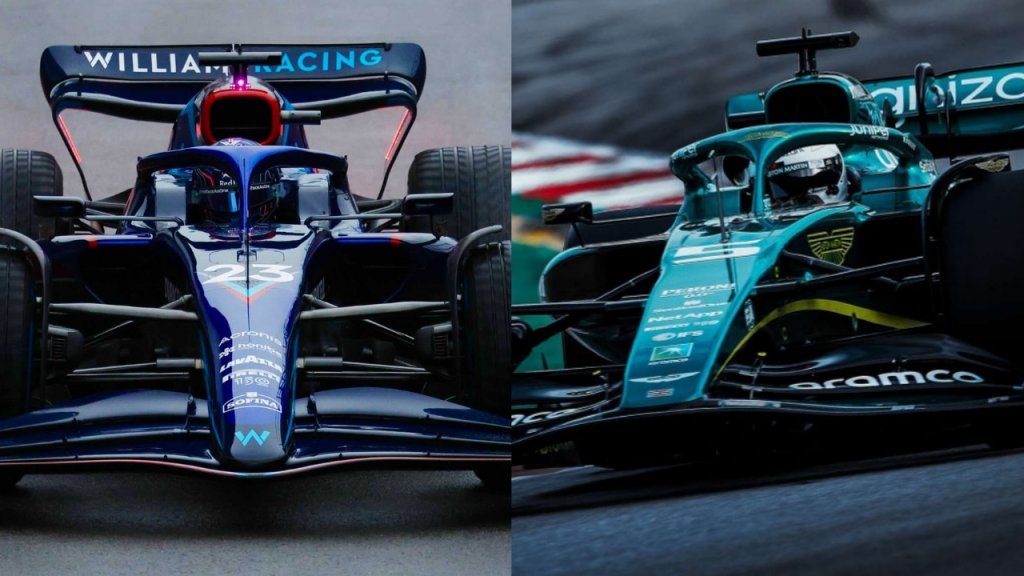 Both backmarkers, Williams and Aston Martin, have introduced extensive upgrades and changes to their cars in the 2022 season. Aston Martin introduced theirs first in Spain and showed little signs of improvement. Williams introduced theirs in Great Britain where a crash led Alex Albon to end his race early, leaving many to continue wondering if their upgrades had improved their performance. Looking at the backmarkers helps us gauge how these teams might do in the future.

It’s easy to see that the Aston Martin is still faster than the Williams. The standings alone are enough to paint a clear enough picture with Aston Martin ahead with 24 points to Williams’ 4. This lead ahead of Williams is similar to 2021 when Aston Martin finished with 77 points to Williams’ 23. So Aston Martin had a better car last year than Williams and the same has continued in 2022. The difference here is the goals of the two teams and how they aim to achieve them.

Aston Martin are planning to go for race wins within a few years. Williams is simply aiming to improve their standings. While Williams will certainly be targeting race wins as any team would, their expectations are lower, and their goals are longer term. Not so with Aston Martin who want better results in a much shorter time frame.

Williams have a 10 year plan as CEO Jost Capito explains:

Capito added that “If you have a 10-year plan, you can have the flexibility short term, as long as you know where you finally want to end up.”

With that in mind, it seems that Williams is indeed on the right track, especially after Spa 2022. The Williams upgrade introduced more conventional sidepods after the Mercedes zero-pods philosophy wasn’t working for them. The team were never able to run the car as low and stiff as a zero-sidepod philosophy requires. The upgraded design features a higher ride height and an increased emphasis on top-body aero.

The team has been happy with the upgrades. And they seem hopeful that this new philosophy will be a good “baseline” for 2023. Head of Vehicle Performance, Dave Robson, explained that the team are “hoping to develop this… It will evolve quite a lot by January, or February time. But I think, in terms of the change of direction from where we were, where the launch car was, this hopefully sets the baseline from which the 2023 car will evolve.”

It took some time for these effects to really become visible, but after Spa, it seems that Williams is very happy given the cars impressive straight line speed and Alex Albon was chuffed with the P10 result, “This was one of the tougher races I’ve done in my career and also one of my personal bests.”

Alex Albon has general praise for the new car and explained why it had taken so long for the car to start producing better results: “The load is better. Actually, if anything it’s a little bit harder to drive, it’s a little bit more peaky in that sense. But if you get on top of it, it’s good. There is a bit of a learning curve to it and obviously we don’t want it to always be peaky and tricky.”

“We’ve got more downforce, that’s clear… That’s important. Then it’s trying to get the car to get the balance into it. We’ve got the rest of the season to do that. And we’ve got a good platform to start on.”

While the upgrade’s first showing at Silverstone was underwhelming, their first proper race was in Austria. Albon managed to finish P12 whilst teammate, Nicholas Latifi, didn’t finish. Albon was frustrated with the lack of points but was overall positive how the new upgrades were faring: “Yeah, obviously frustrating. We want to score points, that’s the game, but considering where we were yesterday it was still a good race, I was happy with it… It’s our first proper race with the new package and we will learn a lot from it… I was really happy with our pace. I felt like this weekend we definitely made a step forward, so positive.”

Jost Capito said that it isn’t important where the team begins 2022, but whether they end stronger than they started. If that’s the case, it’s safe to say that Williams is undergoing successful car development. They have a lot of ground to make up after a terrible few years, but their expectations for this year are simply to improve their position and get closer within the midfield.

Aston Martin have made no secret about their desire to top the grid, which they planned on achieving within “four-to-five years.” 2022, however, hasn’t really seen their desires come any closer to reality. They had a car concept that didn’t work and have now introduced a new slate of upgrades that also haven’t had a significant impact on performance.

Despite the results remaining largely the same, Aston Martin team principal, Mike Krack, was optimistic about the upgrades when they were introduced in Spain:

“The upgrades have worked, have brought us a step forward. The basic problems that the car is having have not been solved.”

Aston Martin have all but admitted that the car has fundamental problems that upgrades don’t seem to be able solve. Those problems relate to grip and balance. Krack explained why he believed this to be the case:

“The drivers are mainly always complaining about grip and balance. When you push it really hard, which I always think when you have a car that is not quick enough, you over push or you try to over push, so you have balance problems… We struggled in all high-speed areas. In Canada, there was less of them, in Baku, there was less of them. The car is quite okay in the low-speed. And [in Baku] it’s mainly low-speed corners. But as soon as it goes high-speed, we are lacking.”

Krack explained further why their upgrades weren’t making as much of difference: “Every team is bringing upgrades and we’re no different. We’ve made significant upgrades to the car throughout the first part of the season, but it’s all relative. People assume the upgrades haven’t worked because we haven’t climbed up the competitive order, but the upgrades have worked – just not enough for us to catch up.”

All their upgrades have resulted in stagnation, they’ve simply kept up with the others relative to their own position. They have a faster car than Williams, but they don’t seem as confident with their baseline philosophy as Williams. It may be that reality has crashed into Aston Martin’s ambitions that seem less attainable as the season goes on.

But much like Williams, Aston Martin had a good showing in Belgium. Their race pace is stronger than their one-lap speed as Sebastian Vettel explained: “We were more competitive in the race than in qualifying: we started strongly and I managed to find a decent rhythm. I was able to put pressure on both Alpines, and I think seventh might have been possible, but they were a bit too fast for us today.”

Does this herald a change at Aston Martin? Unlikely. The track likely benefitted the team this time around, but it isn’t assumed that this success will continue on others. Aston Martin want their performance to improve immediately when the reality is that they are so far behind the other teams, that winning is something of a dream right now.

Whose Upgrades Are Working Better?

Notice the contrast in attitudes between Aston Martin and Williams? Aston Martin have thrown money at the problem and hoped that their issues will be solved quickly rather than taking it slow. Williams is taking a long-term approach that will hopefully inform a strong car philosophy in the future. Aston Martin wanted to be winning races yesterday.

Williams is happy that they’ve finally established a baseline that they can then improve as they go on. Aston Martin are still facing fundamental issues that they can’t seem to overcome. Despite a few impressive races from each, neither team are where they want to be, and it looks like both have a long road ahead of them. The difference is that Williams seem aware of how long that road is, where Aston Martin doesn’t.

With that perspective in mind, the Williams upgrades have installed a stronger trajectory for the team than the band-aid solution of Aston Martin. While the Aston Martin is faster, if Williams keep up this trajectory, it won’t be long before they leapfrog the Astons either next year or in the coming years.

For more, check out what Daniel Ricciardo’s options are now that he’s left McLaren.