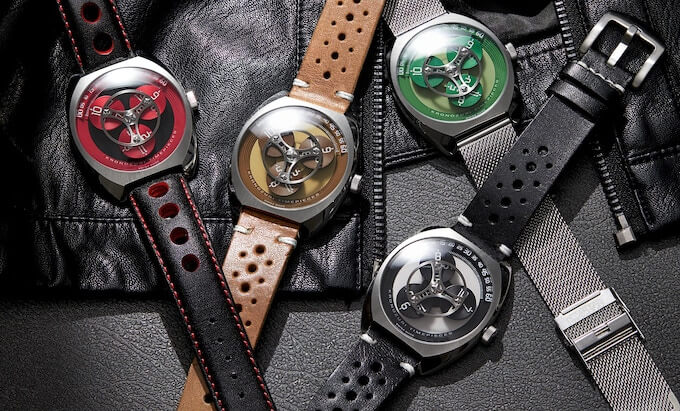 Usually I like to have a watch in hand before I talk about it, but even just having seen it on a screen, I’m smitten with the Wanderer. Well, not with all the colour variations. In fact, a couple of the combos just don’t seem to work and it’s almost as if they’ve taken a page out of the Nike Dunk colourway guide. Just chuck whichever two colours together and they’ll sell. No worries. It works for Dunks because they have ridiculous amounts of hype right now but it won’t work for a start-up, first-time Kickstarter brand, even though they have a fairly legit partner in crime.

Colourways aside, I am smitten with the case style, and the complications featured. It really wasn’t that long ago when Gorilla watches “disrupted” the industry when they released the star wheel time indication in a watch that was priced under 5 figures. It was unheard of, as prior to it, this particular complication was the domain of the likes of Audemars Piguet, Vacheron Constantin and their more modern avant-garde cousin, the Urwerk. The Gorilla Fastback Drift “Wandering Hours” was priced at around $5000 and don’t let the name fool you, Gorilla Watches were founded by Audemars Piguet alumni, design chief Octavio Garcia, and senior designer, Lukas Gopp.

Soon after, a slew of similar looking star wheel based watches started appearing all over Kickstarter, varying in degrees of pricing, styling and the kind of movement they’re based on. The pricing in general was experiencing a downward trend, and there were almost too many choices available all of a sudden. I was very tempted to jump in at multiple points, and the closest (similar concept, albeit perhaps a little bit more complex) was the Phantasos Triclops which we reviewed.

Granted, that should’ve satiated my desire for a weird-looking time display, but the heart wants what it wants, and it almost felt like Kickstarter was still my best bet in terms of the price/complication ratio.

That didn’t take long to happen, and at the time of writing you have just under 5 days to back this project. However, it has already reached its funding goal, meaning the production will go ahead regardless. I think this is also the first such project that has earned the “Swiss Made” label on the watch, and at the kickstarter price? It’s really a no-brainer if you’re into something like this.

So, quick run down of the specs. It is powered by a Sellita SW200-1 (the same sort of engine that has also powered the likes of Breitling, IWC, and other various prestigious high-end Swiss watches) with a wandering hours module apparently supplied by Angles watches (they themselves began as a Kickstarter watch brand, who specialises in creating interesting time display complications). Angles also worked with Phantasos on their Triclops watches. Cased in a 70s tonneau shaped style sports watch case with very reasonable dimensions of 41mm in diameter, 48.5mm lug to lug and 13.5mm height.

Ignore the name (which could’ve been a lot worse…I choose think of it as “Black Rock” in Japanese or, mixing your languages you have “Beautiful Watch” Krono[s] = ‘Watch’ in ancient Greek, Zuri = ‘beautiful’ in Swahili), you’re getting a Swiss made wandering hours watch for the price of a Seiko Prospex automatic on sale. This is an absolute bargain of the year so far.

I’ll put the link below for the Kickstarter campaign. Just don’t all go rushing in.