What image pops up in your head when you hear Tag Heuer Monaco? For me, it’s an image of Steve McQueen from the 1971 movie “Le Mans”, an image that Tag has used ad nauseum. Not that I blame them. It is iconic. Monaco is one of the most distinctive and recognisable square watches in the past 50-odd years. But did you know that the square case was always planned? It was always meant to stand out, to have an impact and become a legend in its own right.

The Monaco Through The Years

In the late 1960s, Heuer (as it was known back then) was in a race to develop and launch the very first automatic chronograph. With a little bit of help from their friends (Breitling, Hamilton, Buren and Dubois-Depraz), they presented working prototypes in March of 1969 – a very important year in the history of watches (and human kind it seems). They were up against Zenith (which presented the El Primero movement – an integrated chronograph with 36,000vph) and Seiko.

To be one of the first to make such a technological leap wasn’t enough for Jack Heuer. He worked with Swiss case manufacture Erwin Piquerez, who developed Monaco’s water-resistant square case; a first for the industry. Looking back now, it might not seem like a big deal, but the key term here is “water-resistant”. It is very difficult already to make a chronograph watch water-resistant, due to the chronograph pushers, but the square case compounds the issues further.

In 1969 the Monaco was born. Named after the F1 Monaco street circuit, a track that is notorious technical and difficult to master. It was fitting that this new square-cased chronograph was given the Monaco name considering the technical prowess of their innovative automatic chronograph, the Calibre 11. And it was presented alongside the Carrera and the Autavia.

The Monaco has remained true over the years, keeping the same classic design, albeit with upgrades and updates. It has seen various applications, from time only movements to the highly innovative V4 calibre, a belt-driven movement that uses ball bearings rather than the traditional wheels and pinions. There was even a “Reverso” version of the Monaco, with a mechanical watch on the front and a quartz watch on the back! Possibly the very first hybrid watch… However, it is the chronograph that held the legendary status. Even the chronograph movement has been updated over Monaco’s illustrious life, and today, we see it fitted with Tag Heuer’s latest in-house movement, the Heuer 02.

Purple is the New Green 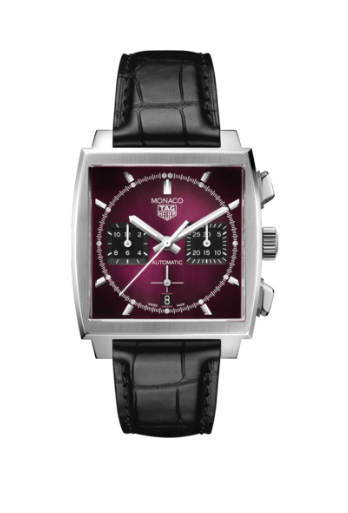 Numerous Monaco limited editions were made (possibly second only to the Omega Speedmaster) but each iteration has done extremely well, selling out very quickly. When you’re onto a good thing you keep at it so you can satisfy the demand and the insatiable appetite that collectors have for the model. Following on from the green Monaco of 2021, this year, the model has been given the purple treatment. Green was and still is a trendy dial colour in the watch world, but we think purple is highly likely to be the new green. And in this case, Tag Heuer is leading the pack.

The purple Monaco is a limited edition of 500 pieces worldwide, individually numbered on the case back. Featuring a stunning sunburst fume finish and contrasting black sub dials. Powered by the Heuer 02 with 80 hours power reserve, it can be seen through the exhibition case back. Given how limited it is (only 25 pieces allocated to Australia, and trust me, many are already spoken for) and how quickly the green one last year sold out, I wouldn’t hesitate to contact your favourite Tag Heuer boutique to secure one before they all disappear.

For more, check out whether the MoonSwatch just changed the game.