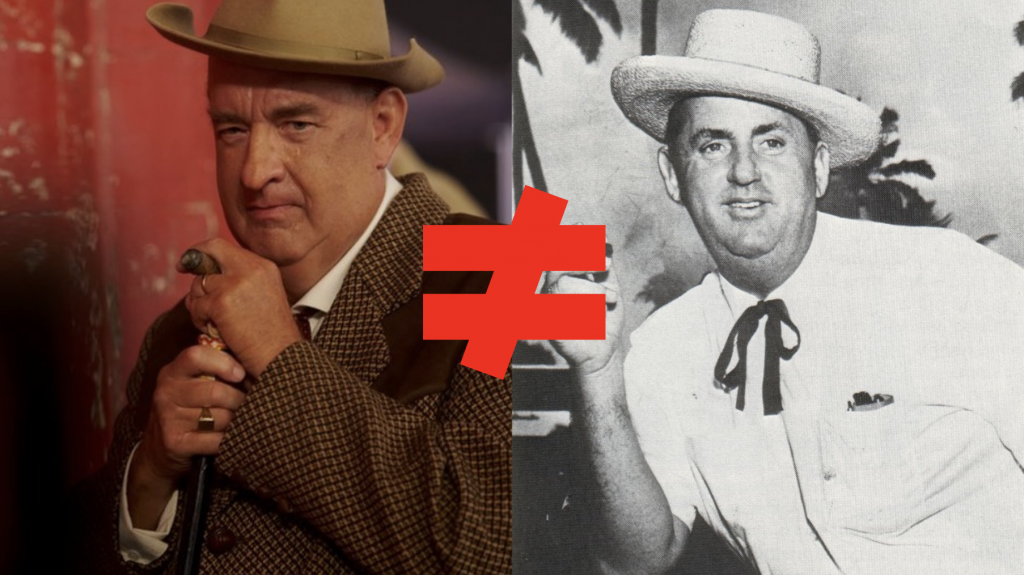 There are several parts about Colonel Tom Parker, Elvis’ manager, in the film Elvis that are simply not true, according to Alanna Nash, Parker’s biographer.

Elvis follows Elvis Presley, played by Austin Butler, throughout his life and career. A big part of that life and career is his manager, Colonel Tom Parker, played by Tom Hanks. To make a long story short, Parker was born in the Netherlands where he was a carnival worker before he illegally emigrated to the U.S. where he got into the music business.

Alanna Nash has become an authority on Tom Parker thanks to her biography, The Colonel: The Extraordinary Story of Colonel Tom Parker and Elvis Presley. Director Baz Luhrmann has apparently not read the book, but he did read the Cliff’s Notes. Not really, but he did read notes from other researchers regarding Nash’s book along with several others.

Nash spoke to Variety about Elvis and said that the liberties that are taken are “essentially fair – except to Parker.” Nash attributes the issues with his depiction as “an antagonist” has caused the film to rob “him of his many accomplishments with his client.”

For example, the Colonel did not pressure Elvis to tone down the sex appeal. Nash claims that,

“He liked it that Elvis did what brought folks into the big tent… Parker loved it that Elvis was like a male striptease artist… That sold tickets! The only time Parker got critical is when the shows began to falter with drugs or erratic behaviour on stage.”

Hanks’ depiction has given him a very strange accent which Nash said wasn’t accurate either. “It was more American, more rural,” she said. “And he had was sounded like a slight lisp or speech impediment. Turns out he didn’t have an impediment – he was just trying to wrap a Dutch tongue around the English language, Southern-style.” Nash said that Luhrmann told her that he thought it “was very important that Tom present the audience with a strangeness, a sort of ‘What is going on with this guy?’”

The Colonel getting into trouble with the American government isn’t accurate either. The film presents government forces threatening to expose his past if he didn’t wrangle Elvis. “That’s total and unequivocal bunk, a complete invention in the movie,” said Nash. “First of all, when Colonel Parker enlisted in the U.S. Army, he declared himself a Dutch citizen, with parents born in Holland… But he [also] worked closely with the Pentagon, planning Elvis’ army career and post-army concert to raise money for the U.S.S. Arizona monument.”

The ’68 comeback special is only somewhat accurate in the film. The Colonel in the film is trying to keep it a Christmas special without the rock n’ roll throwback elements. As Nash explains, “It was supposed to be a Christmas show in the sense that it would air in December, and Parker wanted it to be a family show with Elvis as a 60s-era Bing Crosby or Perry Como. But there was never a Christmas sweater or a fairy-tale Christmas set.”

Elvis also never fired his manager on stage, “but there was an incident in Vegas in 1974.” Elvis was actually criticising Barron Hilton on stage for firing one of his favourite employees. “That led to a colossal shouting match afterwards with Parker and talk of firing and quitting on both their parts, with Colonel ultimately presenting a bill that the Presleys could not pay. And so things resumed as they had been.”

Overall, it doesn’t seem that the film’s version of Colonel Tom Park is that accurate at all but Nash acknowledges that he is a “complicated character.” She ended, “while he always took too much of Presley’s money, he made some very sound business decision for him. Luhrmann hasn’t really given him his due by a long shot.”

That’s fictional adaptations of real history for you. What works in a narrative isn’t always what happened in reality. It’s always important to remember that fiction based on reality is never a wholly accurate representation of events and people as they were.

For more like this, check out the weird stories of Elvis Presley.