It hasn’t always been easy for Australian Fashion Week, but despite a few hiccups on the way, Australia’s only international fashion event has persevered for almost 30 years.

Australian Fashion Week was the brainchild of Simon Lock, a public relations consultant and former ski magazine reporter. With his company, Australian Fashion Innovators, they set out the create the fifth stop on the international catwalk circuit alongside the likes of Milan and Paris.

During its first show in 1996, it featured designers like Alex Perry, Akira Isogawa, and Wayne Cooper. Ultimately, it turned out to be a bit of a bumpy start. It was initially hit hard by the media with British fashion writer Susan Owens writing a scathing review and dubbed Australian Fashion Week, “Fashion Weak.” She said that the 25 designers who attended had wasted their money. Ouch.

You would think that the word of one journalist wouldn’t amount to much but Lock told the Sydney Morning Herald that, “The piece by Susan Owens was unfounded but it had a profound impact with the NSW premier, government, and the industry, so it put us back commercially.”

That would come into play later.

The first few years were a perilous time for the event, as Lock explained, “We made horrendous mistakes, there are hundreds that come to mind from those early days.” They ranged from “lockouts as too many tickets were issues, and our system didn’t work properly” to shows that “ran over an hour late.”

One crisis occurred in 1997, their second year, when Linda Evangelista walked for Alex Perry, they “couldn’t get her into her dress, the zip broke and Alex literally had to sew her in.”

2001 was a big year for Australian Fashion Week. For better or worse. It was Tigerlily’s first runway show, and it saw model Eva Herzigova walked in $500,000 pearl bikini as she was drenched in water. It was a beautiful triumph. Ksubi (then Tsubi) did not want to be showed up however and released 169 live rats onto the runway. Many people were horrified and one rat was crushed and killed, causing an investigation by the RSPCA. On top of that, model Kristy Hinze walked down the runway in a snakeskin bikini paired with a live snake around her shoulders. The snake started to wrap itself around Hinze’s neck to her obvious discomfort. But things were about to get better.

In 2005, Simon Lock sold the event to International Management Group (IMG) for a rumoured several million dollars. This decision Lock believes was necessary for both the survival and success of Australian Fashion Week as IMG also runs fashion week events in both New York and Berlin. He was retained as a managing director of IMG Asia Pacific for five years.

“I always thought of myself as a catalyst. It’s fine for one man to have a vision, but at the end of the day, it was best placed in the hands of a company that runs a global network of fashion weeks.”

In 2005, likely due to IMG’s resources and expertise, saw an explosion of international attention. Jade Jagger (daughter of Mick Jagger) walked for Charlie Brown, and she wouldn’t be the last celebrity to grace the runway. In 2007, Dita Von Teese rode a giant MAC lipstick to many people’s delight. 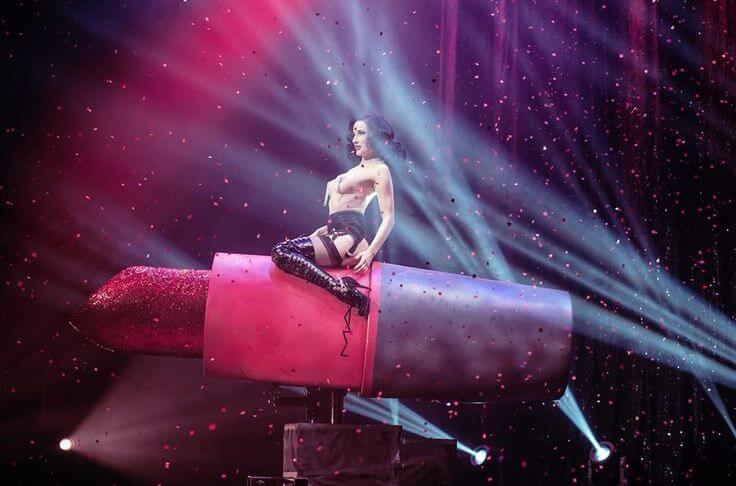 Once 2012 rolled around, Australian Fashion Week had become recognised as the fifth marker on the international fashion week tour alongside Milan, New York, London, and Paris. But it still wasn’t a favourite for the media.

Fashion journalist, Marion Hume, wrote that Australian Fashion Week’s focus on inexperienced, or lesser known, designers rather than the big names was a good thing. “It lets those designers grow [by going overseas] and gives space for younger ones to come up,” Hume wrote. “It’s a natural progression and shows a healthiness in Australian Fashion Week.”

So while it has been a rocky road, we are now at 26 years of Australian Fashion Week and it doesn’t look it it’s going to stop anytime soon and with a desire to be different and uniquely Australian, it’s something Australians can be proud of.

For more like this, check out whether or not Kim Kardashian’s Marilyn dress was a mistake.