Costume designers don’t just come up with ideas out of nowhere and that’s especially true when you have to design clothes for a galaxy of residents! We look into the inspiration for a variety of Star Wars costumes and found some very interesting things.

Star Wars has some fantastic costume design, some of the best in the business and the reason for that is careful choices of inspiration. Where the inspiration for costume design came from was widespread and broad ranging from historical influences all the way to dogs. It’s a wild and interesting ride and a testament to just how much work goes into these films in every aspect. 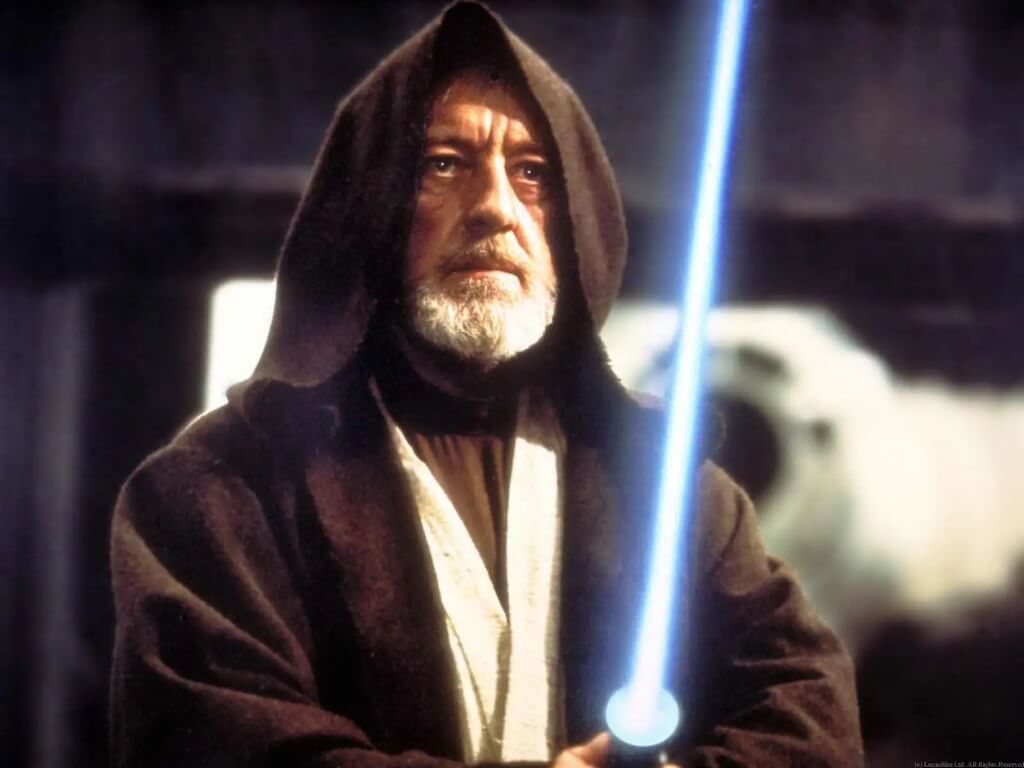 The original trilogy’s costume and set design were cutting edge and innovative for the time. Nowadays it’s very easy to take that for granted given that Star Wars is so prevalent in our culture. Before Star Wars, sci-fi costumes and sets were depicted as slick, new, and seemingly unused. Star Wars changed that by making everything look used, dilapidated, and somewhat realistic. It helped to create a world in which felt different from ours but not so different as to be alienating. It also allows for the world to feel “lived in” and not so artificial.

For example, the Jedi are not knights in shining armour (I mean that literally), they’re warrior monks and their costumes reflect that. Other than their lightsabres, their costumes aren’t crazy futuristic but in fact look backwards towards a more ascetic past. Famously, George Lucas was heavily influenced by the 1956 film Seven Samurai. From that film he was inspired by Japanese aesthetics and beliefs to create the Jedi and their villain Darth Vader.

Japanese kimonos were a big inspiration for the Jedi attire underneath their robes. There’s also some martial arts inspiration with karate attire (gi) making its influence felt. It’s not just their clothes that took Japanese inspiration but also their lightsabres which rather than looking like European style broadswords, were more akin to katanas. A samurai’s sword was called the soul of the samurai and you can even see that reflected in how the Jedi treat their lightsabres, especially when you go into the lore and discover the process of creating a lightsabre.

That’s not where the Japanese influence ends though. Luke Skywalker’s costume in A New Hope, a white tunic, khaki pants, and soft-soled boots are reminiscent of a boy farming rice in a paddy field. He is a moisture farmer in the first film after all.

Darth Vader’s costume also has inspiration from Japan, but his design was far more varied than just that. George Lucas told costume designer, John Mollo, that Vader was “a dark lord riding on the wind.” To achieve this look, Mollo mixed everything from bikers, samurai, and Nazis. His helmet is similar to Kabuto (helmets) from Japan but that’s really where it stops. His helmet was more directly inspired by mixing a gas mask from WWI and a Nazi helmet. The rest was motorcycle leathers, black biker boots, and a “monk’s cloak found in the Middle Ages department of a costume warehouse,” as Mollo put it.

Not only was Vader inspired by the Nazis but all the officer uniforms in the Empire were influenced by the Hugo Boss uniforms Nazi officers wore in WWII.

Han Solo’s costume design was actually extraordinarily simple in hindsight. He’s a space cowboy so he looks like a cowboy. Vest, knee-high boots, and a gun holster on his side? That’s pure cowboy all he’s missing is the hat but who needs a hat in space?

You know how I said the Jedi are not knights in armour? Yeah, well turns out that is exactly what the Stormtrooper design was inspired by. Their armour and how it was put together was directly inspired by medieval knights.

Other inspirations were very simple, for example, the Rebel pilots’ uniform was inspired by the real-life Mercury 7 astronauts and that’s plain to see with the orange jumpsuits especially.

Chewbacca’s inspiration was very cute. As Lucas’ himself has stated before, Chewie was inspired by his dog. Lucas tells it, “I had an Alaskan Malamute when I was writing the film… a Malamute is a very large dog – like a hundred and thirty pounds and bigger than a human being and very long-haired. Having her with me all the time inspired me to give Han Solo a sidekick who was like a big, furry dog. Not quite like a dog, but intelligent.”

Leia’s costume inspiration actually surprised me. As Lucas told Time in 2002, “In the 1977 film, I was working very hard to create something different that wasn’t fashion, so I went with a kind of Southwestern Pancho Villa woman revolutionary look, which is what that is. The buns are basically from the turn-of-the-century Mexico.” Makes sense, she is a revolutionary against the Empire after all.

For the prequels and the later sequels, much of the costume inspiration has remained the same for obvious reasons. However, there are several very interesting origin stories for the costumes in the prequels which had to be bigger and better than the original trilogy.

Nowhere is this clearer than Padme’s costumes. Despite her character being underdeveloped, you can’t say the same for her wardrobe. Overall, Padme’s costumes were meant to evoke the look of Eastern royalty and pre-Raphaelite models. Prequel costume designer, Trisha Biggar, said that Padme’s costumes were supposed to give a “Chinese Imperial feel.” You can see it clearly in The Phantom Menace where the shades of red are marks of regality in China. The gold Korean and Mongolian designs were also inspired by traditional wedding dresses. The headpiece she wears is inspired by Mongolian headpieces. Padme’s costumes change throughout the trilogy to depict her changing status so that by the end you can see there are fewer headpieces and more practical outfits.

Bringing it back to the Japanese influence, Darth Maul in The Phantom Menace was inspired by Japanese oni, or demons. These were symbols or even figures to be feared and were often found on helmets. These demons tended to have antlers or horns which you can see plainly on Maul. Also the red and black face paint is very demon-esque don’t you think?

The Kaminoans, the alien race who made the clones in Attack of the Clones, were inspired by classic aliens. Lucas stated that “The Kamino design was a very deliberate nod to the classic alien of Close Encounters.” Makes sense given Lucas’ and Encounters director, Steven Spielberg’s friendship over the years.

As costume designer, Michael Kaplan, told The Hollywood Reporter, “The rebels are decidedly earth-tone and knit fabrics and warmer colours and rough, and olives and wools, and some sweaters… The First Order feels more hard-edged and synthetic and black and impervious.”

That’s all very broad but Kaplan goes into further detail for the First Order. He didn’t want to just copy Nazi uniforms, instead he “thought a lot about the silhouettes of Thierry Mugler in the 80s and 90s… I love the sharp lines and the severe silhouettes with heroic-looking shoulders… that was something that also came into Hux’s design. And also the simplicity of the dark greys and blacks together, and the simplicity of just a beautiful silver belt buckle.” Why are the villains almost always more interesting than the heroes?

I love his explanation for Snoke’s costume. In the film, Snoke’s costume is all CGI but in order to ensure the CG artists got the design right, Kaplan made the real garment for them to use as inspiration. Turns out they needed the real garment for when Snoke got cut in half. Kaplan describes Snoke’s costume as his loungewear. He’s heard people say his costume reminds them of Hugh Hefner, which he likes. There’s little velvet mules and the robe itself was a “rough Star Wars kind of fabric that’s very nubby and textured and then we had it gold-leafed.”

Snoke’s Praetorian Guards (the red guys in the throne room) were inspired by ninjas and a series of red muscle cars from the 50s and 70s with special attention paid to their vents.

Leia also gets a revamp with the addition of capes influenced by Queen Elizabeth II. “I thought capes were good,” says Kaplan, “especially when she’s in the cave and on the battlefield. There are pictures of Queen Elizabeth II wearing a military cape that inspired me.”

Rey was very similar to Luke but took a more North African/Middle Eastern influence with it as you can see with the tunic and protective gauze that keeps sand out. Kylo Ren is an extension of Vader, he’s cosplaying as his grandfather essentially and that’s what his costume reflects.

Leaving the main series behind, Lando Calrissian in Solo has a very fun and funky inspiration for his costumes. Lando’s costumes took inspiration from the suave looks of the 1970s, particularly Jimi Hendrix and Marvin Gaye. As Solocostume designer, David Crossman, said, “We were looking at a lot of our favorite rock stars [like] Hendrix, Marvin Gaye. Glyn had a picture of Marvin Gaye with this leather collar with the detail, which we looked at for Lando. And I think the cape thing just kind of grew a bit because even in the original film, Lando, fair enough, he’s always wearing a cape but …we’re doing this kind of young, aspirant Lando that’s kind of using all his money to buy clothes and project himself.”

He adds that Lando is “dressing for the job he wants, not the job he has.” Isn’t that fantastic? Prince and James Brown were also additional influences.

And that’s all for now, there’s more but this article is already long so please let us know if you have any knowledge of additional costume inspirations for Star Wars below!