I recently visited Melbourne to watch the Australian GP and while I was excited, that quickly dissipated once I realised what General Admission would really mean for me.

The Australian GP is now officially the largest sporting event in Australian history with over 400,000 people attending throughout the weekend, and I was there, I was a part of it. I was there in the same capacity as the majority of attendants, in general admission. You know what I learnt? Don’t go to see Formula 1 in person if you’re poor.

For some background, the Australian GP was ridiculously popular as I’ve already said, so while I did try to get grandstand tickets, the site wouldn’t allow me to purchase them due to demand. “Whatever,” I thought, “I’ll just get General Admission tickets and save a bunch of money.” How bad could it be?

Free Practice was fine as you’re really just there to hear and see the cars go by and that part is awesome… for about five minutes. The issue arises the moment you actually want to pay attention to what’s going on in the race or qualifying.

For a start, the ground is flat. So flat that if you aren’t right at the fence line, you will struggle to see absolutely anything. Short people, this isn’t for you. And there simply are not enough screens in Albert Park to make up for the lack of hills in which to view the race from. Granted there isn’t usually this many people attending the Grand Prix but even with fewer attendees the screens are planted in front of the grandstands not GA. There isn’t really any spot in GA with its own dedicated screen purely for those away from the grandstands. The few that do exist are hooked up to the performance stage away from the track. At that point, just watch it on your TV.

Check out where the screens are down below relative to the grandstands. 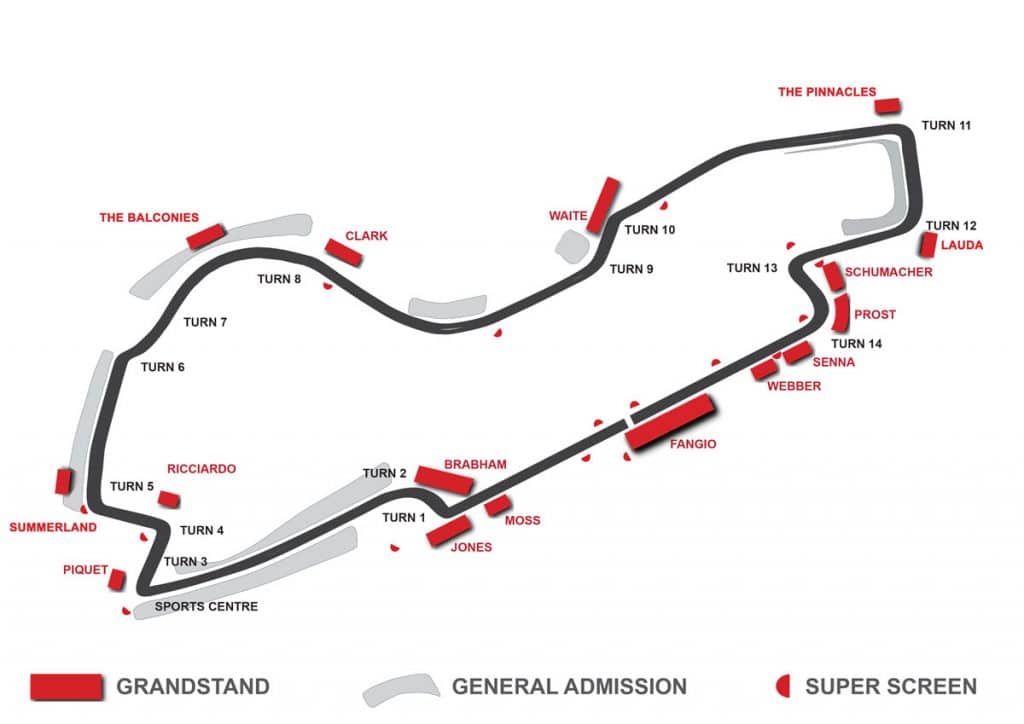 You may be thinking that you could just stream the race on your phone or tablet while you’re standing by the track. Good luck. With so many people in one area, the reception just can’t really load a stream. So, there you are standing in the middle of a field in front a track you can only kind of see with no screen to make up for it. There are some bleachers but those will be taken before you get there unless you arrive three hours early. It is first come, first serve which is fine if they really had anything to serve.

Maybe you just listen to the commentators like a radio and keep up with the race that way? Well that would be fine if you could hear the commentators at all when the cars drive past and if something happens at another section of the track, you have absolutely no clue as to what it was. They also can only talk about so many things at once so naturally some things get missed which I don’t blame them for.

I have never been to a sporting event where the disparity between the cheap and the expensive seats was so vast. I shouldn’t have been surprised given Formula 1’s expensive and prestigious reputation but what is the point of going to the track at Albert Park if normal fans can’t even watch the race?

If you cannot get grandstand tickets for any reason it is not worth your time and money if you want to watch the race with any kind of focus and attention. The few good spots are overcrowded and everything else is less than ideal.

I thought that maybe the general vibe of GA would be fun and that the atmosphere might make up for the fact that I didn’t have a perfect view. But no. There was no party atmosphere during or before the race, despite the best efforts of a few of the DJs, everyone was so focused on trying to get a decent view. Most seemed upset or disappointed especially children who couldn’t see a thing and couldn’t even look up at a screen.

Other tracks around the world you can see that GA isn’t as bad of an option, it seems to be an Albert Park problem. You have only to look at the Hungaroring with its natural amphitheatre or Spa with its varying levels of elevation. There just really isn’t any consideration for those in GA, which I might reiterate is easily the majority of attendees.

I won’t be attending the event again unless GA attendance issues are addressed, or I have a grandstand ticket. It’s just not worth it otherwise. Just watch it at home, you won’t miss anything, and you’ll save a bunch of money.

As a friend of mine in the grandstand put it to me on the weekend, “You get what you pay for.”

For more F1 content, check out why the Caesar’s Palace Grand Prix failed.